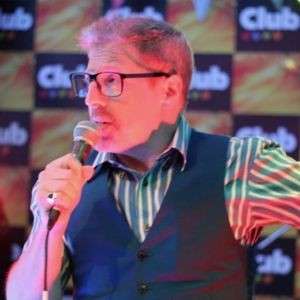 Here we witness one man’s deep dive into a lifetime of depression. The sheer honesty and self-effacing journey Jonathon took us on meant it was difficult not to be a little sad. At times it was confronting, making the reality of depression and all its ugliness a little unconformable. That is the aim. We need to talk about the untalkable so greater understanding can be developed.

To deal with the elastic nature of revolving depression Jonathan finds solace by tapping into his inner child. Here we went on a ride with his three trauma puppets. Each presenting a different aspect of his depression curve. They are all neatly contained in his fictitious TV show called “trauma time”.

Outside of “trauma time” Jonathan’s comedic monologues were mostly in the “Dad joke” category. Some hit home and were genuinely clever and funny, while others jokes simply failed. The disconnect between English humour and contemporary Aussie humour I feel played a big part here.

Overall the show delivered a slow burn story around the decent into depression and wrapped up in well researched and possibly useful therapies designed to help the audience cope with this puzzling diagnosis.

The show was concluded with a silly dance in lycra. While I would ordinarily shy away from such a glam show of maleness, I found it to be one of the funnier parts of the show.

Was it a cure for depression? While there were some laughs to be had, some of the therapies left me puzzled.