The Alchemist of Feelings 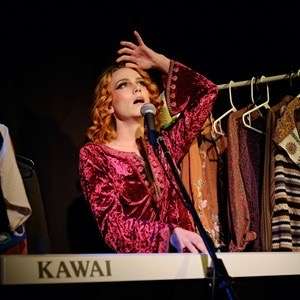 It is one thing to perform a Fringe show alone but another to perform a show where you lay your vulnerabilities and feelings bare in a room full of strangers which Frankly does in her cabaret show The Alchemist of Feelings. The show feels like an open diary of Frankly’s emotions, mental illness, memories and grief. Frankly has this inner confidence of her work and acceptance of her feelings that she masterfully connects with every member of the audience. It felt like I was the only person in the room- transported by magic into Frankly’s mind- her voice washing over me like a wave, transfixed by every new line of song, whether comedic or emotive.

Frankly is honest about her battles with mental illness and we are quickly introduced to the fact that she sees a therapist-using offbeat humour to normalise the conversation around mental illness and seeing a therapist. Frankly is candid about The Alchemist of Feeling being put together at the last minute due her mental illnesses (Frankly mentions three) But you would never be able to tell as this show though raw with emotion was well polished besides the microphone stand not playing nice which Frankly took in her stride with her quick-wit. It was refreshing to focus on other aspects of living with a mental illness and the challenges that it can bring rather than the normal tropes. It humanized Frankly and made her relatable.

Relationships in Frankly’s life have shaped her and influenced her outlook on life and love.  Frankly shared cherished memories of her stoic grandmother who had passed away and the grief of losing the person who always believed in you even when they don’t understand what you do. Through song, Frankly showcased her storytelling prowess teleporting you to her grandma’s house, leaving you feeling you had lost someone close to you. It was such a beautiful song that her grandma would have been proud.

The show does touch on politics and feminism- warning these topics do lead to a conversation about rape culture that may trigger some people. It was during this point of the show that Frankly was her most passionate-her powerful and hypnotic voice piercing through ensuring you felt every emotion in those words. It was a performance that will resonate with many who have experienced rape culture and want change.

Frankly’s set was modest, just her, a haphazard microphone, electric keyboard and black shade cloths, upstairs at The Producers Hotel. The Alchemist of Feelings thrived in an intimate setting, it allowed Frankly to interact with the audience and felt like we were no longer strangers by the end of the show. There is something cathartic about singing along with the artist about the normalcy of our feelings. Frankly is unapologetic about being ‘’sensitive” and living with a mental illness.

The Alchemist of Feelings is a mixture of comedy, poignant and authentic moments. Frankly deserves her feelings to be witnessed by a room full of people. 4 stars.