Singin’ in the Pain 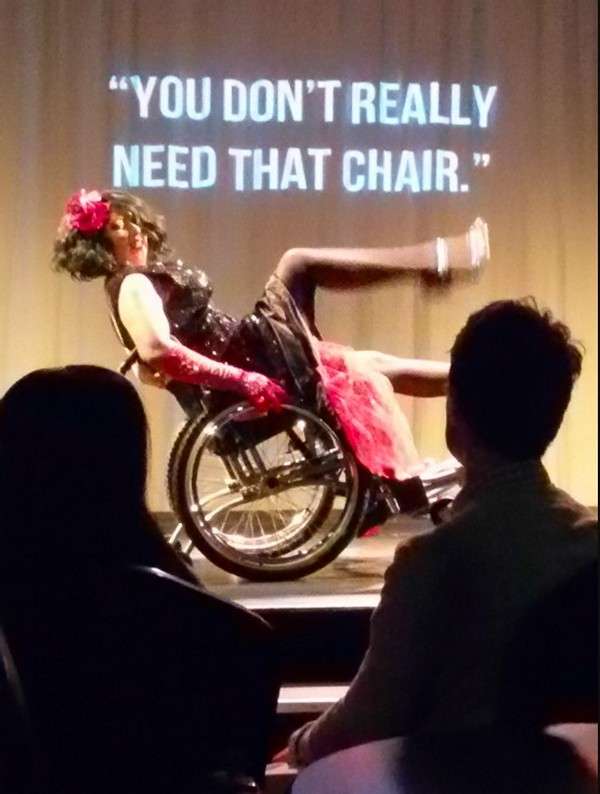 My third show to review for mindshare was Singin’ in the Pain last night at Nexus Arts in the Lion Arts Centre.

This is burlesque with a definitive kick, produced by Diana Divine who began by sharing her own story. On strong painkillers after putting her back out, which she later discovered she was allergic to, Diana performed a show in excruciating pain et voila, the title!

Diana removed her back brace to music to demonstrate burlesque for those unfamiliar with it and then sang about trying to accomplish things with a constantly shifting finish line. Her voice was amazing.

Diana introduced the first act – Jaqueline Boxx (aka Miss Disa-burly-tease) from the US. With Ehlers-Danlos Syndrome, which affects connective tissues, Jacqueline performed in a wheelchair as pertinent messages flashed across the screen behind, such as You don’t look ill and the one below, culminating in a defiant pose giving the finger.

Next up was the recently crowned burlesque idol SA who, with one hand deformed, fascinated with a fan dance, her energy and stage-coverage exhausting, quickly followed by Moisty Magic who shared her history of mental illness through song. Moisty’s voice wasn’t as strong as Diana’s and having Googled her, I found a far more profound performance she gave called Unique.

Madame Savage graced the stage next, drunk on love and high on prescriptions, who, suffering from diabetes and rheumatoid arthritis to name a few, demonstrated difficulties in the bedroom. Her act finished with a release of medical waste from above – empty blister packs, syringes, boxes, etc. – representing just a few months’ worth. Imagine this for everyone managing a debilitating condition.

The next act enthralled me – Laetitia Stitch who, after visiting ER with endless bleeding, was eventually diagnosed with polycystic ovarian syndrome. Laetitia presented herself as a bandage, head to foot in white, which when peeled, revealed its symbolic red lining. Living with endometriosis myself, this resonated.

While the acts were not as polished as some I’ve seen at the Fringe, they were brave and the concept’s quite brilliant, in its attempt to shatter the assumptions associated with disability, highlight individual experience and demonstrate that accessibility shouldn’t be a barrier. I believe it achieved its goals.