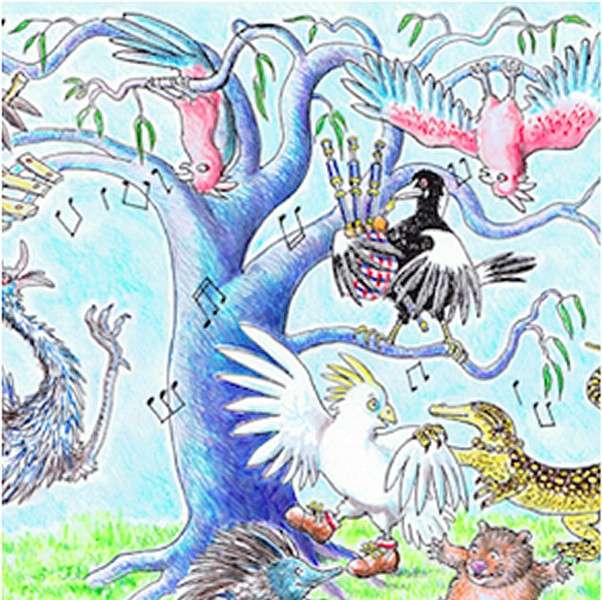 Two professional performers Claire Gurry and David Cronin have produced an energetic show with catchy songs and dances. They both have a musical background. Guury has raised three musical children, teaches guitar, ukulele, voice, and works in the mental health and school education sectors. Guury and Cronin are involved in public performances. Guury in her spare time’ performs with acapella choirs and Adelaide Qwire. David Cronin is a professional performer, speaker and drama coach. He performs his shows at schools, libraries and festivals. He also conducts classes in clown, applied improvisation and workplace wellness – “Actionsspeak” is the program.

This performance is orientated towards children, although adults or parents joined in on the activity. There was throughout a quintessentially Australiana theme with the two actors enjoying themselves in an informal dance and song.

Costumes were used as well as puppets with Australian animals and birds as subject matter. The children wore capes mimicking a galah and related choreography such as flapping arms and the imaginary way of using hands to pick at food.  Another example of an Australian native animal was the platypus. Song and dance were used to mimic the life of a platypus. It was an improvised exercise, showing the way such an animal would find food and digging with sharp claws into the ground. The children yelled out appropriate answers when questioned by the actors, saying that a platypus has a beak like a duck and webbed feet. Other native animals included a bilby, gecko, kookaburra, koala and kangaroo. The actors also asked questions of the audience wanting to know the term used when communicating over a distance and coo wee was the answer.

Props were used to enhance the production of Silly Galahs, with multiple rainbow streamers and bright colours of a sheet pretending to be blown by the wind with the aide of both children and parents. Bells were also used to play musical tunes such as nursery rhymes like Twinkle Twinkle Little Star and Baa Baa Black Sheep were warmly received.

There was an element of education throughout the show. Songs were performed expressing the importance of water use and turning off the tap when brushing ones teeth and the health aspect of eating fruit like bananas.

The show was a delight to watch and the interaction between actors and children put a smile to my face. I also participated in the fun, dancing and singing, although not being overly fit I later noticed that my muscles had a workout. It was a wonderful production and I enjoyed the afternoon.