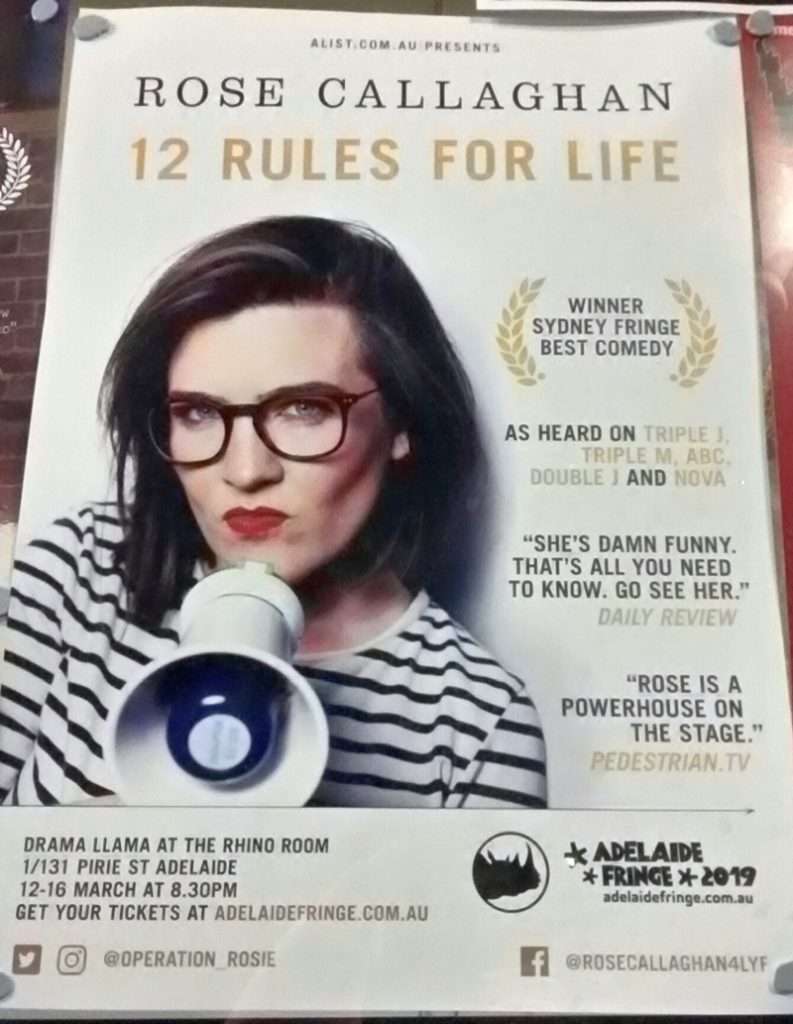 Originally from Melbourne, Rose moved to Sydney for, in her own words, ‘dick’, having been single for 7 years, which is almost 3 Olympics and in Australia, about 15 Prime Ministers. Rose thinks dating apps are ‘rivers of shit’, as many state their occupation as ‘CEO and Founder’, which she interprets as an overconfident Uber driver with an ABN.

So now armed with boyfriend and having grown out her fringe, which she refers to as ‘face curtains’ (and interestingly, men’s pubes as ‘dick beards’), Rose is seeking some rules for life. And that’s when she discovered Jordan Peterson, a psychologist and author of self-help books, aka ‘a Trojan horse for masochism’. Rose played some audio clips to demonstrate this, in which Peterson draws comparisons between humans and lobsters amongst other things, prompting Rose to exclaim:

(at which point Rose checks the audience knows what a moon cup is, explaining it should be called what it is – ‘blood bucket’). Rose is a feminist, belonging to many groups on Facebook until they start fighting each other, at which point she cancels herself and joins a smaller group, until they start fighting each other and so on, until she’s in a group with just herself where ‘things are a lot calmer’. Suffering from Attention Deficit Disorder, this is ideal for Rose.

Rose believes only homeowners watch The Block and they should invent The Renters Block Edition, where the winner gets their bond back. Continuing the house theme, Rose spoke about how her baby boomer parents no longer have space for her small collection of childhood things, despite their huge empty house where her bedroom is now a study, which most in the audience could relate to, along with the way men come to bed and simply announce ‘I’m sleeping now’ and do just that.

Rose was entertaining, and when sharing her own life rules before closing the show, there were some fundamental messages – ‘own your mental health’ and ‘respect people’s mental health’, something we should all do, despite the challenges we’re often faced with. So, what are your rules for life? Mine’s simply ‘Life’s short, make fun of it.’