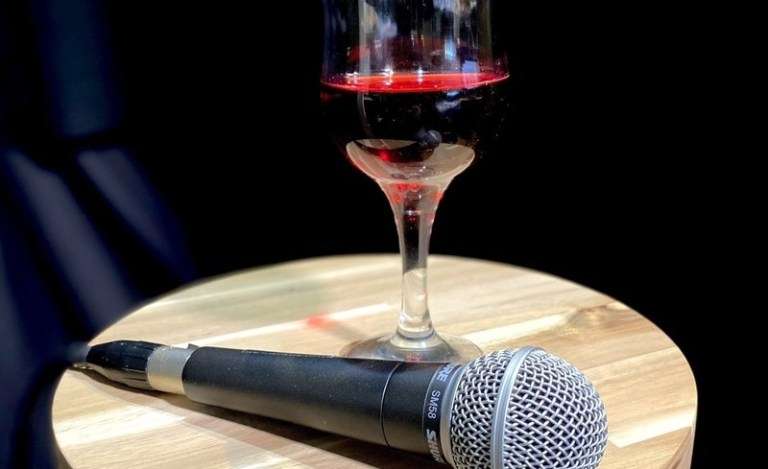 There’s a fine art when it comes to deceiving your audience, and maintaining the illusion of the show until the right moment. Allowing the audience to slowly realise that they are not watching a stand-up comedy show about religion but a biblical digital theatre performance.  The Preacher has the same characteristics of a stand-up show with its dry humour and rhetoric but it is more of an exploration of the relationship between preaching and performance, whilst using texts from the biblical book of Ecclesiastes. The Preacher cleverly deceives and maintains the illusion with such subtlety that it leaves you scratching your head, on how you missed the obvious signs. It is a testament (my attempt of a biblical pun) to the creator of The Preacher (Anthony Novack) to find the link between a preacher and a comedian.

The show starts with a biblical message from the book of Ecclesiastes, lingering on the message for a moment. In hindsight it was a precursor to what was to come.  We then hear a voiceover announcing David “Dave” Davidson, who is the star of the stand-up show. The camera captures David being unprepared, in front of a black backdrop, drinking wine. That wouldn’t be the last time we see David drinking the biblical beverage; the glass of wine was used as a prop or a segue tool throughout the show.

David starts his routine joking about flying into Brighton for The Fringe Festival but admits he couldn’t fly out because of COVID. In fact, this was a pre-filmed video I was viewing.

Before I caught on to the premise of the show, I thought David was an awkward comedian who talked to the audience like he was a presenter from a pre-schooler show. He told religious puns and jokes that didn’t really hit my funny bone. I was unsure how a stand-up routine would work without an audience, and David the Comedian didn’t seem to have the confidence to carry the show. It wasn’t until he morphed into the King/Preacher that he hit his stride as a performer. With the conviction of his words washing over you and his not-so-subtle arrogance about his own wisdom, David became a more intriguing and layered character. He became captivating figure who not only carried the show but demanded your attention.

Throughout The Preacher, there are cracks in the Preacher’s facade that he is enjoying life’s simple pleasures and the life God intended us to live. It’s during his philosophical diatribes, that you detect David struggling with the fairness of life and how meaningless life feels to him. We are shown fleeting hints of depression and despair that lives within him, with wine being his emotional crutch. Marriage was also a sore point for him. You can feel the distain he has for it, bitterness and sadness etched in his words.

Wisdom and fools in power is a common theme in The Preacher as is power and oppression – highlighting, even after thousands of years, that the same issues are still prevalent within our society – people in power are still fools and still oppressing those less powerful than themselves, illustrating the belief that what has happened will happen again and the bad will continue to receive what the good deserve.

The Preacher is a multi-layered performance which will leave you on your toes. This show won’t be for everyone, with its religious and nihilistic overtones woven within every scene, it will frustrate some with its overuse of cliches and phrases. Simply, it will confuse many with its premise.  The Preacher will appeal to people who like absurdity delivered at a fast pace, a performance that is thoughtful but humorous while examining theological ideas.

This one-man show was slow to hit its stride. It took a few scenes to find its groove and for it to resonate with me. A person with less patience or a clear understanding of what this production was trying to achieve may have stopped watching. It is a show definitely worth persevering with, with its poignant musings about morality, suffering and life being the biggest joke of them all. It leaves you viewing comedians and preachers in a similar light. I give The Preacher three and a half stars.