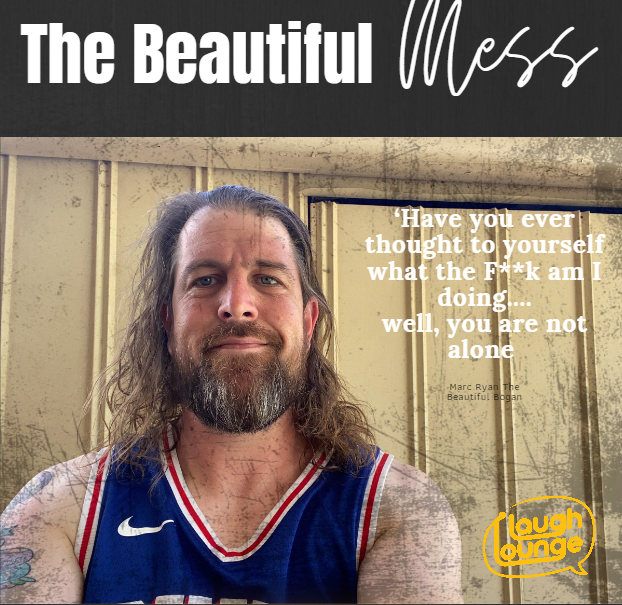 The best part about reviewing is discovering new venues that you wish you’d heard about sooner and Laughter Lounge is one of those venues. The laugher lounge is a hidden treasure—with its intimate setting, you get a feeling that laughter lives within the walls. Maybe that’s why I was cracking jokes on the night: the ghosts of jokes before possessed me. It’s just the perfect place to watch stand-up comedy.

Normally before a show, you don’t get a chance to interact with the talent, but I had the privilege of talking to The Beautiful Bogan before he began his show The Beautiful Mess. For someone who is honest about having low self-esteem and is self-effacing, The Beautiful Bogan has a real presence about him—he just owns your attention. Though our interaction was brief, I just knew I would love his stand-up show.

When you think of a Bogan, often your first thoughts are negative, i.e. a Pauline Hanson supporter, but The Beautiful Bogan’s goal is to change these perceptions about bogans. He is proud of being a bogan and he is a loveable one at that.  The Beautiful Bogan is a great example of why we shouldn’t judge a book by its cover; he may look like someone who fights (not a fighter) but he is really a salt of the earth kind of guy, using humour to spark conversation and awareness about mental health and suicide ideation.

The Beautiful Bogan was open and brutally honest about his struggles with his mental illness and suicide ideation, especially in 2020. The last South Australian lockdown was the catalyst that drove The Beautiful Bogan towards contemplating suicide. If it wasn’t for the bassist from the band The Ghost Inside reaching out, there may have been no show—illustrating the importance of being there for someone who isn’t in a good place.

The Beautiful Mess emphasises the need to tell our stories, as they can help save or change someone’s life. The Beautiful Bogan shares an anecdote from one of his past shows where telling his story helped the toughest guy in Pt Lincoln to confide in him about his past trauma that he had suppressed. The two even ended up hugging, because even the toughest people need comfort.

The Beautiful Bogan’s love for his wife and children radiates throughout the show. They clearly motivate him to stay alive. You can tell he loves being a dad and he is doing everything he can do to stick around for them, especially for Gary. Gary is The Beautiful Bogan’s favourite kid—we all know parents have favourites!! Gary may be the favourite because of the incident with the ceiling fan, but who hasn’t accidentally hurt their child? His parenting hijacks are very relatable and hilarious, but also heart-warming. I particularly like how The Beautiful Bogan breaks things down for his children, specifically breaking down why having a hot stepmum wouldn’t be such a good idea.

Life is funny and overwhelming and sometimes you can’t change or fix a situation, but you can laugh at life and The Beautiful Mess made me do just that. The Beautiful Bogan is an authentic comedian who isn’t looking for sympathy or pity. He genuinely wants to help people, whether through comedy, hugging, or sharing stories.

The Beautiful Bogan loves being a stand-up comedian. You can tell he is in his element being up on-stage—he is one comedian I wished I discovered long ago. The Beautiful Mess mirrored my life and thoughts in many ways : life is a mess but also beautiful. I am grateful that I was able to review this show. I give The Beautiful Mess four stars.