Review: Something in the Water 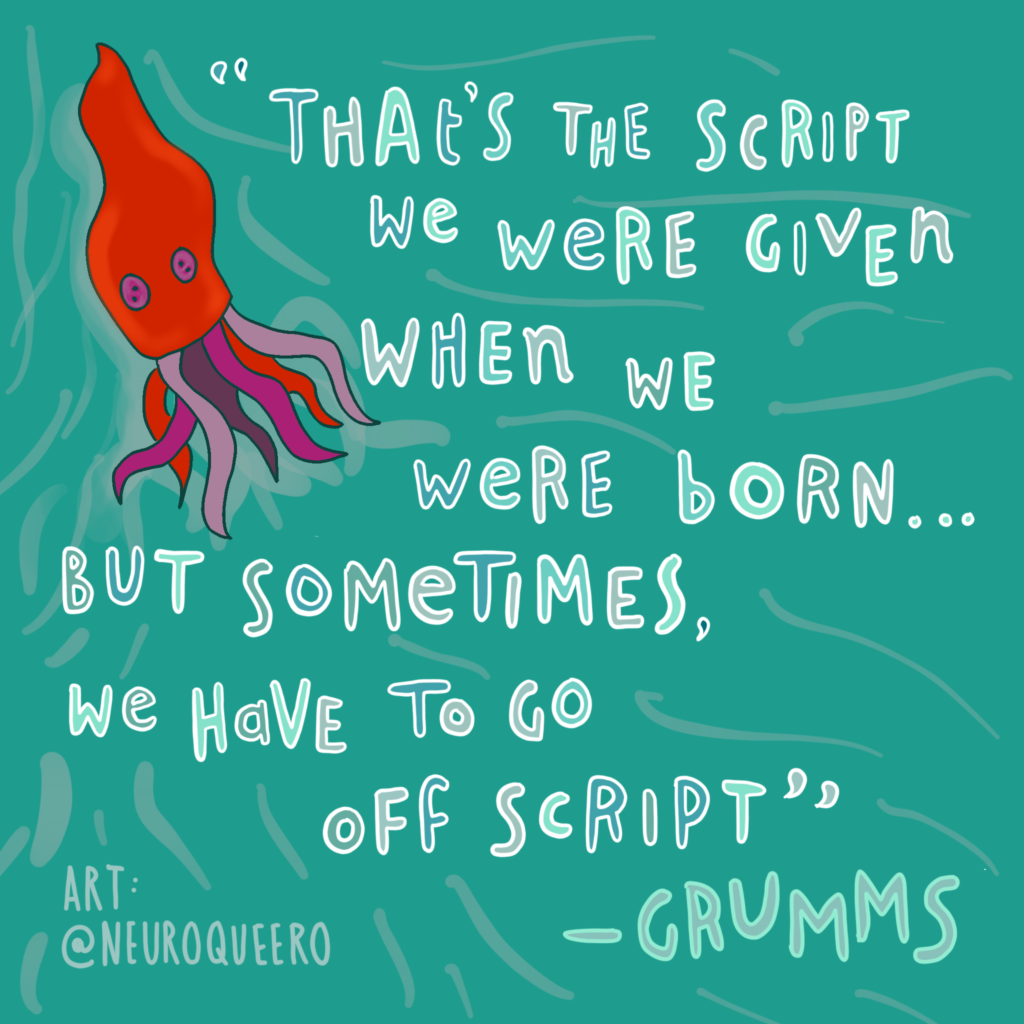 Want to feel seen in all your beautiful, idiosyncratic glory? So does Grumms. And they want you to feel seen, too. This empowering show is a must-see for anyone identifying as not totally on board with the expectations and norms that society has set out for you, particularly if they relate to who you were defined as at birth.

Uplifting while also being educational and very, very silly, Something in the Water takes the audience on a ride through what nonconforming has meant for Grumms, and the possibilities of what it might mean for the rest of us. This is the perfect show to see with both your gender questioning and pronoun-disrespecting relatives or friends.

For nonbinary people (folks who identify as one of the other genders than the two default modes in our society, “male” and “female”) and trans people (folks who identify as a different gender than the one they were defined as at birth), coming to self-acceptance about gender can be a winding, beautiful, but sometimes confusing road. When on that road, it’s common for folks to ask to be referred to using different pronouns (for example: she/he/they/ze). Someone asking you to use their updated pronouns is an act of deep trust and fierce vulnerability; the person asking feels safe enough with you to trust that you will see them in all their newly-discovered gender blossoming. Using these pronouns is a sign of acknowledgement of, and respect for, the person asking, and an honouring of their recently-made-public gender. The single best thing you can do for the mental health of a nonbinary or trans person is to see them wholly, accept the grace they offer you in sharing their unfurling with you, and respect their pronouns.

At the same time, for folks who identify with the gender they have been known by their whole lives, it can be hard to grasp the nuances of this lived experience. I get it. People forget new pronouns, misremember, and can easily get overwhelmed with the amount of new information that can be involved in embracing a loved one in their full gender complexity. However, I doubt any cis person (the term used for a person who identfies with the gender they were assigned at birth) would use incorrect pronouns with their nonbinary or trans loved one if they only knew the soul damage and relationship destruction misgendering can wreak.

So what to do about this conundrum, of fierce vulnerability of sharing pronoun requests meets overwhelming confusion in loved ones? Never fear, Superhero Grumms comes to the rescue! Grumms uses outlandish, comic-inspired costumes, set design and physical comedy to make plumbing the depths of a sometimes murky topic accessible, fun, and fantastical. While the show has broad comedic appeal, and provides highly poignant and widely relatable commentary on society, its superpower value is in helping folks understand the nuanced beauty of our collective blossoming understanding of gender identities, Thank you, Grumms.

Taking Canadian-strength jabs at gender norms as they play out in dating and play, this show’s real target is the inhumanity of the gendered structural oppression we are all subject to. Implicit mental health themes of anxiety, depression, and gender dysphoria are explored gently, with silly but poignant references to being in the closet, code switching, diet culture, gender-based violence, masking, repression, and toxic masculinity.

The innovative and highly effective audience props, set design and staging deserves a special mention, but not a spoiler! The audience participation was on-point, providing visceral engagement with the performance in a delightfully surprising way. For this specific aspect, I have one wish… that we audience goers were involved as cheerleaders a little more than angry mob. The superhero at the heart of the show roundly deserves it.

This one-squid-person show throws a light-hearted, tentacle-fisted punch at the cis hetero capitalist patriarchy, and the contortions it drives us all to. Four tentacles.