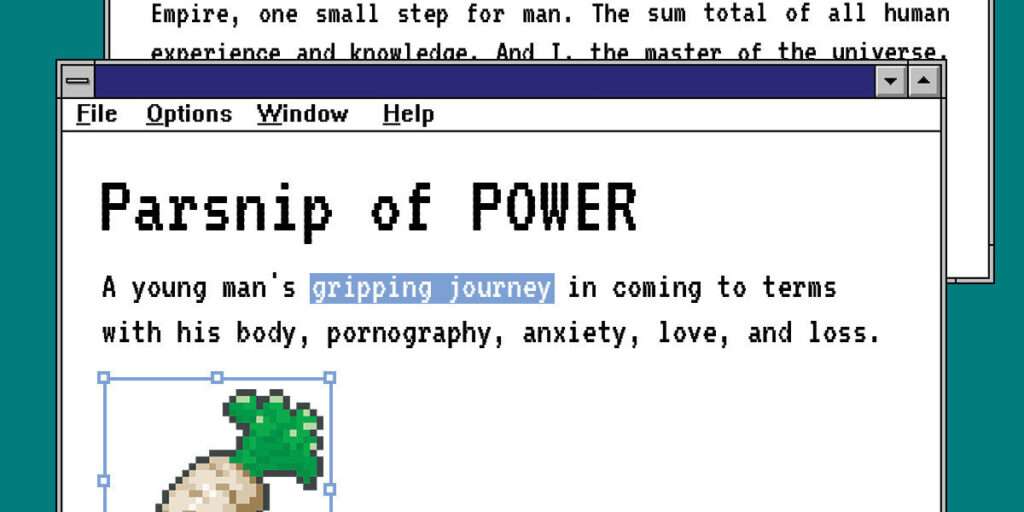 Sweet, cute, and nostalgic for the tech and teenage pastimes of the early 2000s, Parsnip of Power charms its audience right out of the gate. Joshua Kernich tells a fantastical, sophisticated, and deeply personal story that is, at its root, about weaving a compassionate relationship between addiction and the self.

The highest recommendation I can give is that Parsnip of Power made me aware of, and made me question, implicit biases against “the addicted” I didn’t know I had. As someone whose mental health struggles manifest as chasing the dopamine hit from extreme self-discipline, I haven’t understood or valued the struggles of people who chase the dopamine hit from the extreme self-abnegation of addiction. I’ve understood the pain and the systemic inequities contributing to it. I’ve understood the need to find a way, any way, to escape the crushing weight of interpersonal, societal, and systemic fracturing, loss, and rejection.

But it was only during the closing moments of this show that it dawned on me: my struggles and Johua’s struggles are the same. People with addictions are coping in the same way I am – when there’s too much load on the system, we ALL need to exit. In this A-ha! moment, I was deeply, uncomfortably aware of my how much I’ve internalised the pejorative nineteenth century trope of addiction as personal failing. And as I sat with that discomfort, withstanding the temptation to be swept away on the fear-based judgements that sprung up, something miraculous happened. I felt less alone. I felt validated.

If someone told me that an hour-long story about a cis straight white man wanking off would have made me feel better about the world, I never would have believed them. But it did. Go see it for yourself, and see if it makes you feel better, too. Four stars.