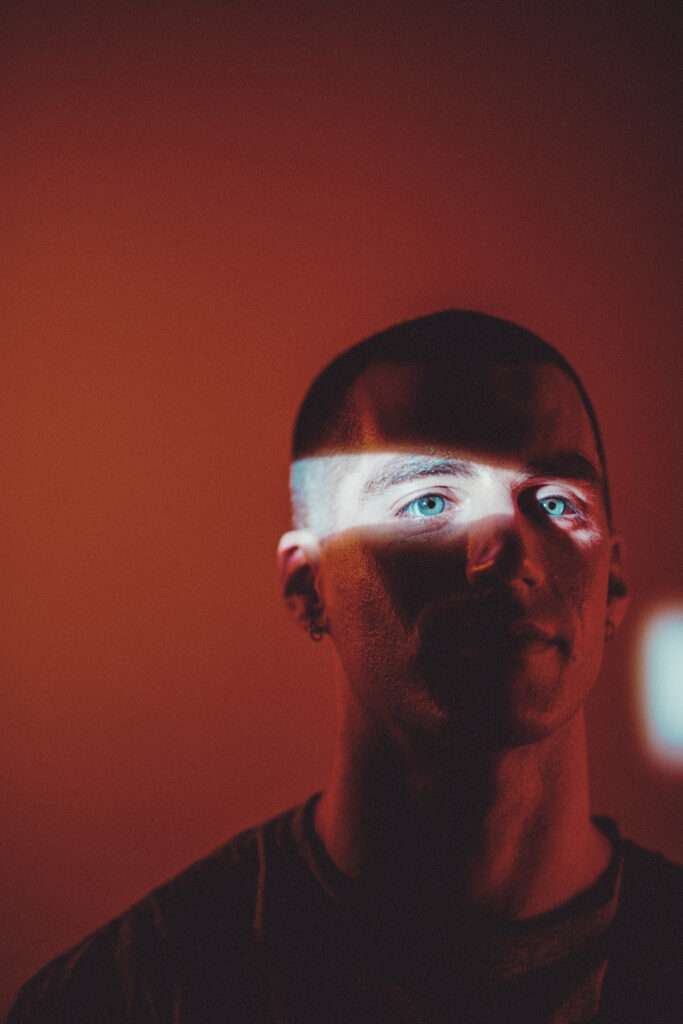 Naomi is a candid yet sensitively presented theatre experience which radiates love from start to finish. The work explores the life and suicide of a woman named Naomi from the perspective of eight characters all embodied by performer and creator, Patrick Livesey.

As I enter into the theatre, I am met by an illuminated, LED triangular frame, encompassing a honey-comb mesh, standing at the back of the stage. Livesey enters from stage left carrying a bag, the contents of which will be pulled out ceremoniously throughout the show and attached to the mesh. Set designer Xandra Roberts, has created a visually striking piece that evolves throughout the performance. I don’t believe it is coincidental that a shape synonymous with strength and support is the most enduring source of light throughout the show. I interpret the triangle to be a reflection of Naomi’s vibrant and powerful personality which has left its mark on those in her life. Roberts demonstrates both innovation and clarity within her impressive work.

Something truly remarkable within Noami is the lighting design by Matt Ralph, which is intricate and deliberate in its arrangement. Each of the eight characters has their own lighting, some harsh, some soft. Some warm, some cool. The scheme of each character is lucid and carries Livesey’s engaging performance even further, as they are back and front lit by a spectrum of hues throughout.

Naomi’s score is a beautiful and eclectic collection composed by Biddy Connor. Connor’s soundscapes rise during moments of interlude from Livesey’s verbal storytelling and create a powerful backdrop to the objects they pull from the bag. Connor doesn’t allow herself to be confined to a single stylistic choice, utilising different instruments and sounds for each piece. However, the pieces still fit together, much like the pieces of Naomi they accompany to form a complete picture.

The performance given by Patrick Livesey is raw and hypnotic. Livesey moves from character to character with chameleon-like precision in their embodiment of each individual’s mannerisms, speech and quirks. Delicately directed by Bronwen Colemen, Livesey’s characterisation is a wonder to behold. Coleman and Livesey make for a fearsome duo, both having a hand in producing this revelatory theatre experience.

Naomi explores the subjective nature of memory in the wake of loss, and the varying perceptions of mental illness. Despite the contrasting views expressed, all the characters are linked together by their common love for Naomi. The way the narrative is structured allows for much needed moments of relief after the emotional monologues. I both see and hear the audience around me simultaneously laughing and sniffing as they wipe away their tears. Livesey does not shy away from content discussing suicide and mental illness but also concludes the performance by informing the audience of the resources available in the digital program if the found themselves triggered by the show’s content.

Every element of Naomi has been artfully (and lovingly) crafted by the skilled team behind this masterful work.