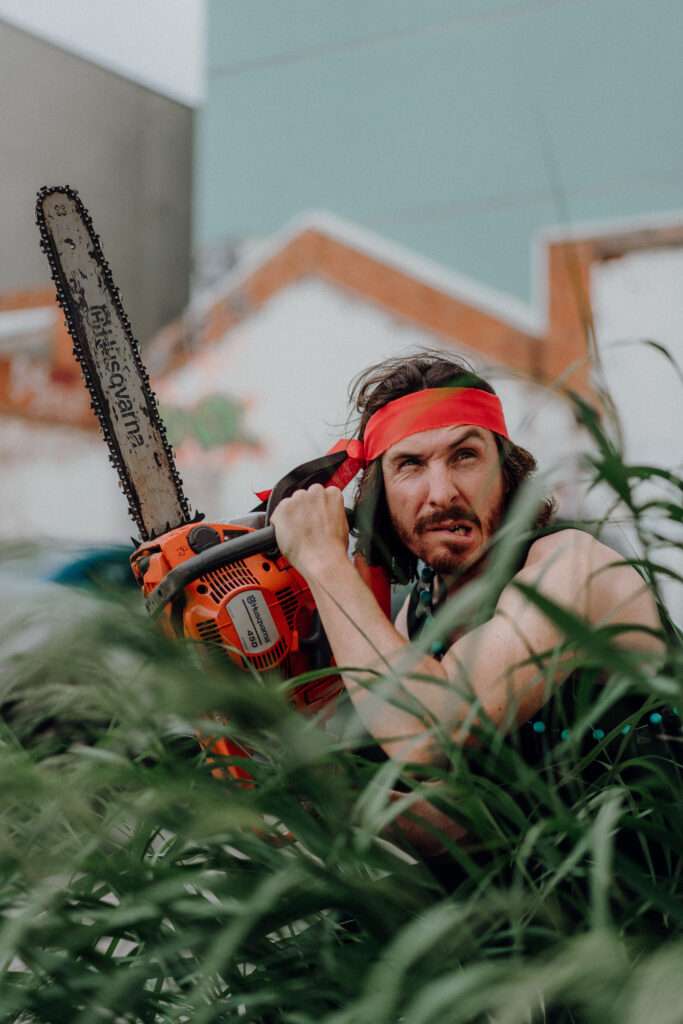 Armed with a G.I Joe version of himself and an imaginary gun, Sam Dugmore’s latest satirical show MAN-BO is a comedy that dares to tackle toxic masculinity and stereotypes all while running away from fake explosions.

Dressed up as a satirical 80’s action man, Dugmore takes us on a one-man journey as the titular character MAN-BO reluctantly decides to return to battle to save the Colonel. Its unique premise remains engaging throughout the entirety of the show. Alongside the help of audience participation, Dugmore is able to create a compelling story that leaves the audience wanting more all without missing a beat.

Full of outrageous punchlines, Dugmore playfully takes jabs at the stereotypes we have all come to know of a cheesy action film. Workout montage, over-the-top fight scenes and thick accents, no trope is left unturned that Dugmore doesn’t explore.

However it is this unique premise that allows Dugmore to signal to the audience a new message. The effects of toxic masculinity. We begin to learn that MAN-BO is a lonely figure who is afraid of love despite his extreme bravado.

By exaggerating these tropes, Dugmore is really showing us how men tend to keep a facade or hide their emotions in order to present an image of masculinity that society forces upon them.

MAN-BO is not afraid to call out the ramifications and harmful elements of toxic masculinity. As by keeping up his facade, MAN-BO has created a toxic cycle that keeps him isolated and afraid to reach out. However the show keeps this idea relatively light in favour of comedic elements.

Yet in the final act, Dugmores showcases the true danger of toxic masculinity. MAN-BO is called out by the show’s villain who states that the two are quite similar and are simply “little men”. By putting up a mirror to the very antithesis of who he is, MAN-BO comes to realise that not only is he a victim of toxic masculinity but he is a perpetrator of it too. By engaging in these traits, he too has left a wake of destruction behind.

But MAN-BO provides us hope. By understanding his behaviour with the help of the audience, he is able to break through the cycle. He learns to let love in.

As Dugmore sings his final refrain, we are left with a tale of a man who has overcome his conflicted journey to come out the other side with a new lease on life. He promises to us that we too can overcome our fears if we just try to reach out. Three stars.