Review: Magic on the Edge – Success 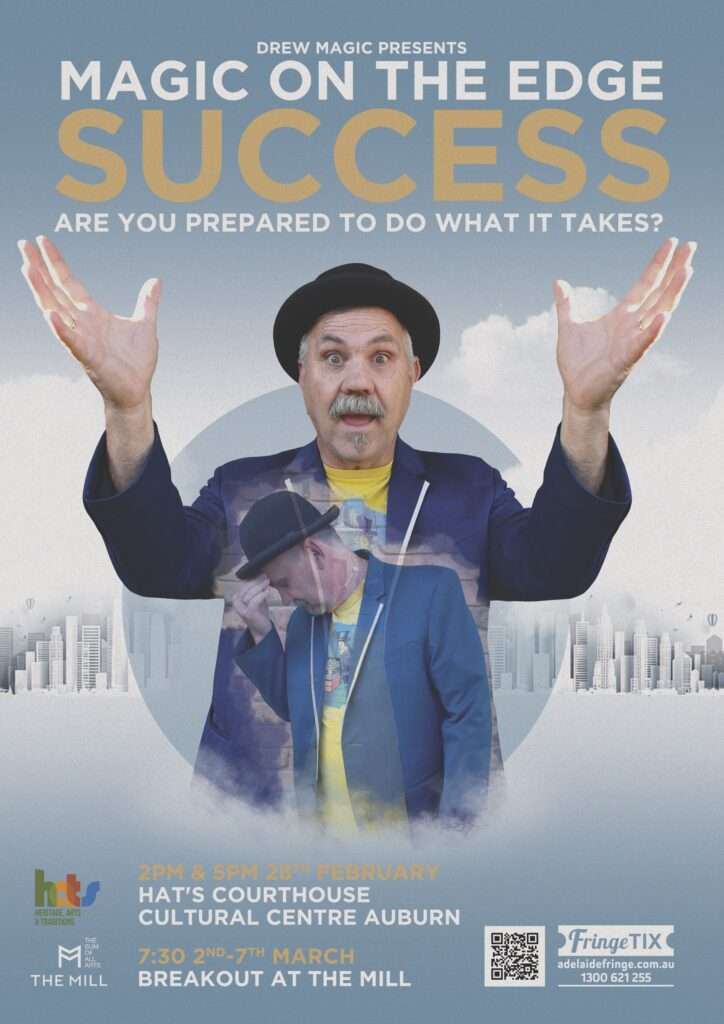 Pick a number between one and ten.

Multiply it by two.

Divide it by two.

Subtract your first number from your current number.

Now, keep your answer secret, it will be important later…

Drew Magic opens his show with a similar trick to the one above – it encourages participation from the audience but seems a bit pointless. He looks like a typical magician in his shiny suit with quirky little bowler hat and his manner is pleasantly engaging, his dialogue littered with anecdotes and light banter. But, from the outset, it’s sideshow magic, the kind you’d expect at a kid’s birthday party.

He talks about having big ideas then delivers a clumsily executed hidden object illusion. Next, he makes a complete shambles of an already underwhelming card trick. When his third trick falls flat because he can’t pull off the big reveal, there are a few audible groans from the audience. We’re starting to shuffle in our seats, feeling a bit embarrassed for our host. He’s a good sport and is struggling to uphold his jocular persona but his performance is bumbling and amateurish and is descending into farce.

Drew apologises for his ineptitude and promises to try to pull his act together. He talks again about the ideas he had for the show. He talks about how it feels to fail, to fall short of other’s expectations, to feel as though you’re letting yourself down. As an audience, we begin to feel great empathy for our host. It’s all too easy to sit in judgment of others. As the pace slows and Drew sits in spotlight, silent for a moment as his fingers deftly fold and unfold a sheet of paper, we are given time to reflect. We have all experienced struggles, we have all had times when nothing is going right, we have all felt unworthy. As Drew’s fingers finally still with a perfect little origami butterfly in his palm our applause is vigorous, we want to show our support, we want to reach out and encourage him to succeed.

As we move into the show’s second half, the tricks become more complex and their execution is flawless. Drew continues to explore perceptions of failure and success in his dialogue, intertwining personal experiences throughout his act. For example, one particularly well performed illusion uses self-help guides as props. Drew talks about his attempts to balance his own faltering mental health with the use of such aids. He talks about times when he didn’t know where to turn, where sadness seemed everlasting and all consuming. (While these themes are heavy and Drew’s tone serious their exploration is well within the show’s PG rating). He talks about finding the courage to finally reach out to family and friends and explains that just having someone there to listen gave enormous relief.

He encourages anyone experiencing difficulties or overwhelming feelings of sadness or unworthiness to reach out to those around them.

And at the end, he sets everything right. Every bumbled trick from the opening scenes has a glorious and dramatic conclusion. The show is rejuvenated and revived piece by piece – a wonderfully fitting metaphor for Drew’s inspiring story of hope and resilience. With support things can turn around, things can be okay in the end.

Which brings us back to our beginning.

Remember your answer to our little number trick?

The answer is four. Four stars for an honest, uplifting, and entertaining exploration of one man’s journey through mental health.