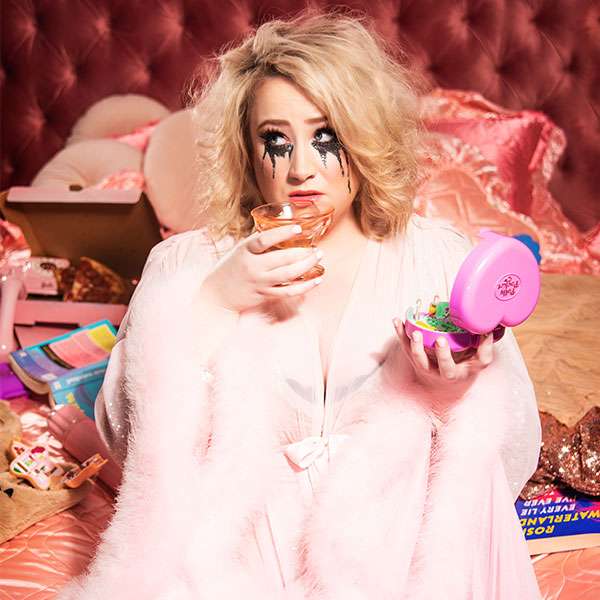 ‘Writing became the shovel I used to dig myself out of a pretty shitty childhood’ says Rosie Waterland in her Australian Story recorded last year. ‘Australian Story’ starts and finishes her Fringe show, ‘Kid Chameleon’ at the Rhino Room, as she tells us you know you’ve made it when you have your own Australian Story.

Waterland’s one-woman show is a combination of her two best-selling autobiographical books ‘The Anti-Cool Girl’ and ‘Every lie I’ve ever told’. Sitting on a sofa, barefoot with a bottle of champagne, she proceeds to tell us stories from her life for an hour and a half. She has that rare gift of making you feel as an audience member that she is speaking directly to you. She also has the gift of being able to make most things funny. Nothing is off limits for Rosie Waterland – her childhood with her alcoholic, mentally ill, drug addicted parents, her struggles with mental illness and suicide and in spite of the laughs, she uses humour as a way of documenting the trauma. The name of her show ‘Kid Chameleon’ describes the kind of shapeshifting that comes from living in the constant chaos caused by an abusive and neglectful childhood.

Despite the serious nature of a lot of the material, Waterland is bloody funny. Stories about pubic hair removal, giving oral sex, getting drunk and having her BFF break up with someone for her and her inability to do simple things like post a letter thanks to her abusive childhood, had the audience at times, gasping and snorting for breath. The show sometimes meanders a bit, is overly long and could do with the discipline of a good director, but she’s so funny it hardly matters.

But for me the most powerful part of the show was near the end, when Waterland addressed the ‘Australian Story’ story. Earlier this week, Waterland described the experience of filming the show in a series of 18 tweets as ‘an absolute fuck up’ and went on to say ‘My experience with Australian Story was traumatic, upsetting, and ended up with me watching my episode from a psychiatric hospital, because I was so traumatised by what they forced me to do, to film my episode”

It was clear from the start of the show that Waterland was going to go full circle back to the Aunty elephant in the room and I expected more of the same from Twitter . What she actually did was far more powerful. For several minutes, she was serious, articulate and laser sharp, as she spoke of the healing power of owning and controlling your own story. Rosie Waterland is a natural comedic story-teller, has one hell of a story to tell, and after this week (ironic as it is given she got her break writing satirical recaps of ‘The Bachelor’) she has also become a strong public advocate for safe story telling in the media. And one just has to watch ten minutes of MAFS to know we are in dire need of that.