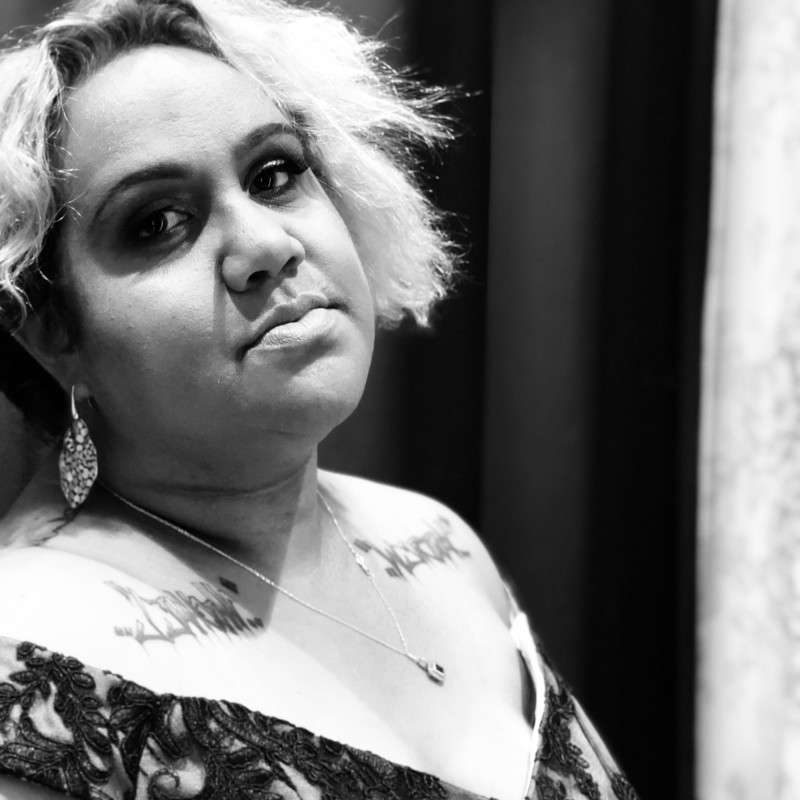 My leempeen says, “you wanna know our joy, you better know our pain. And if all you wanna talk about is our pain, you better get to know our joy.” I kept hearing her words during Elaine Crombie’s show, “Janet’s Vagrant Love”. I kept hearing my old Aunty’s voice, because this show—what Elaine has created—is both Black joy and Black pain in equal measures. It is me. It is every one of my sistas and all of my grandmothers’ past. It is intimately my story, and it is the story of every Black person drawing breath in this colony. And because of that, it is one of the most powerful pieces of theatre I have seen.

There was this one point in the show, where I thought I would have to leave. Walk right out of the theatre. I know it sounds bad. Sounds kind of dramatic too, right? And it wasn’t because the show was bad, on the contrary. It was because the show was so damned real. The scene, with the heavy breathing and Elaine crouched over the mattress, ooft! I could hear the blood pumping in my ears and my heart rate fasten; I began to sweat, and I found myself digging my nails deep into my thigh just so the pain would bring me back to the present. It was so raw and so tangible, that the pain Elaine was showing on stage was as visceral to me as my own pain is on the days that I forget to disremember. To be able to illicit that kind of reaction is true power, and that’s what this show is, Black power.

The show wasn’t just powerful, though; it was joyful too. There were moments of mirth and love. There were moments of sadness and moments of rage. I was particularly moved by the lyrics of the song about our mob killed in custody, and by the music of “sacred ground”. The lighting was brilliant and well cued, the props added everything and detracted nothing. And Elaine herself is a formidable force on stage – whether she is angry or smiling, cackling or crying, or singing with her soulful voice – she is a delight.

But before I recommend this show to you with every fibre of my being, I want to mention one more thing. There is a scene (the one I referenced earlier) which is intense. It is so well done that it will take you back to that place, whether it is from your own experience or you travel back to Elaine’s. It will cast you way back and then in a heartbeat, Elaine will propel you forward with a joke. And that my friends, is what Black women do to survive in this colony. We can only persist in existing if we are ‘resilient’. We are raped one day and pushing a shopping trolley with our kids the next. We bounce back. Not because we feel no pain, but because we have to. Because we have no choice other than to put one foot in front of the other and keep on keeping on. We do it for our kids, for our old people, for our mob. We do it because the violence of this colony is unrelenting and if we laid down and died after every assault, or every violation, we would never rise again.

Thank you for seeing me and allowing me to see you. It was a privilege.

Five stars for every year of Black resistance.