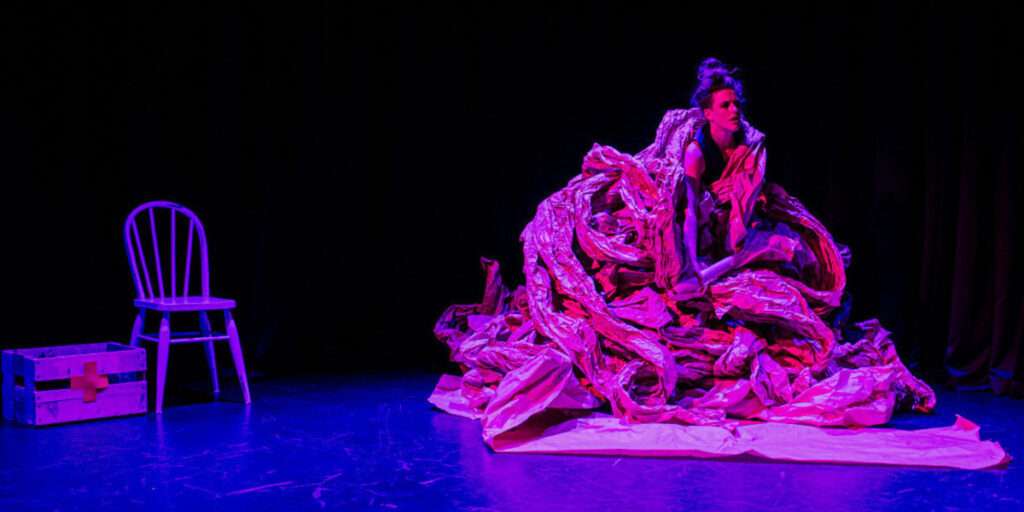 This review was written for mindshare, a creative community and online mental health publication. Reflections are by mindshare writers with lived experience of mental illness, specifically critiquing through a mental health lens. Content may contain triggering themes.

Walking into the Bakehouse Theatre, I wasn’t sure what to expect from Andi Snelling’s show Happy-Go-Wrong. I tend to go into shows blind, as it enhances the experience. I do try to look for clues on set to help me piece together what the show may be about. The clues were clouds, twisted brown butchers paper, a chair and wooden First Aid boxes. I made several guesses in my head, but I didn’t guess that the show would start with a philosophical angel named Lucky (Played by Andi), entering the stage with a torch and roller skates. Lucky, unsteady on her feet but with a glean in her eye, and a good bad French accent interacts with the audience by asking them to put up their hands “if they are alive and if they are committing to life?”. Some hands are up high, and some are barely up.

Lucky the skating angel uses the interactions from the audience, to make funny and poignant observations about the human condition. Lucky’s speciality is morality/ death. She lives for death and her mission is to help Andi, who is stuck behind the fourth wall coming to terms with her own mortality.

Happy-Go-Wrong is a one person show about Andi Snelling’s personal odyssey, starting from the accident that changed her life (being bitten by a tick) that resulted in her becoming physically ill with Lyme disease, her struggles of being a performer with a chronic illness, realising the want to live after being close to death and orchestrating her own rescue. At the beginning of Andi’s odyssey, Andi tangles herself amongst brown butcher paper to symbolise her struggles with her illness. We can hear her panting as she fights her way out of the butcher paper, sometimes disappearing. It reminded me of someone drowning in waves.

It was obvious through Andi’s show how much performing means to her but also the mental and physically toll it has on her mind and body to perform. Andi intelligently uses physical theatre to emphasise the physical toll to the audience.

Lucky’s smart commentary and comedic timing blends well with Andi’s personal odyssey, showcasing Andi as a masterful storyteller. She delicately ties intricate threads together with dance, physical theatre, miming, clowning, music and song, leaving the audience unsure of what will happen next. The unpredictability of Happy-Go-Wrong ensures the show is captivating and suspenseful throughout. This is a testament to Andi Snelling’s ability as a storyteller and performer; she displays an incredible ability to change from comedic to dramatic with precision.

In between scenes, there were audio clips of an automated answering service which sounded like they were from a Government agency. Often the messages were unhelpful and uncaring. Though these clips were funny, it clearly showed Andi’s frustration with Government agencies and their insistence in not recognising Lyme disease.

Andi Snelling’s aim throughout this show was to make the invisible visible, while also challenging the audience to think about how we treat people with an invisible illness. Whether it is saying the wrong right things like, “How are you?”, “You look good for someone with an illness” or the unsympathetic lines like, “At least you don’t have cancer” and “Aren’t you better yet?”

Andi literally and metaphorically bared all on stage, letting the audience see her vulnerability, her truth and rawness. Her appreciation for life and love of being a performer was radiating from the set. The final scene of Andi, roller skating naked, showed there’s hope in adversity.

Andi told us that her work only means something if it is received from the audience… and received it was. Happy-Go-Wrong garnered a standing ovation, bringing tears to Andi.

I would also like to acknowledge the Auslan interpreter who interpreted the show. She did an amazing job. It was great that Happy-Go-Wrong was an inclusive show.

The show didn’t end onstage but in the foyer where Andi talked to members from the audience, many who related with her struggles with Lyme disease. Andi ensured she talked to everyone who stayed behind, giving hugs of support and words of encouragement.

Happy-Go-Wrong made me laugh, cry, shift uncomfortably, and feel uplifted all in the space of an hour. A show that needs to be seen, it left a lasting impact on me. I give it five stars