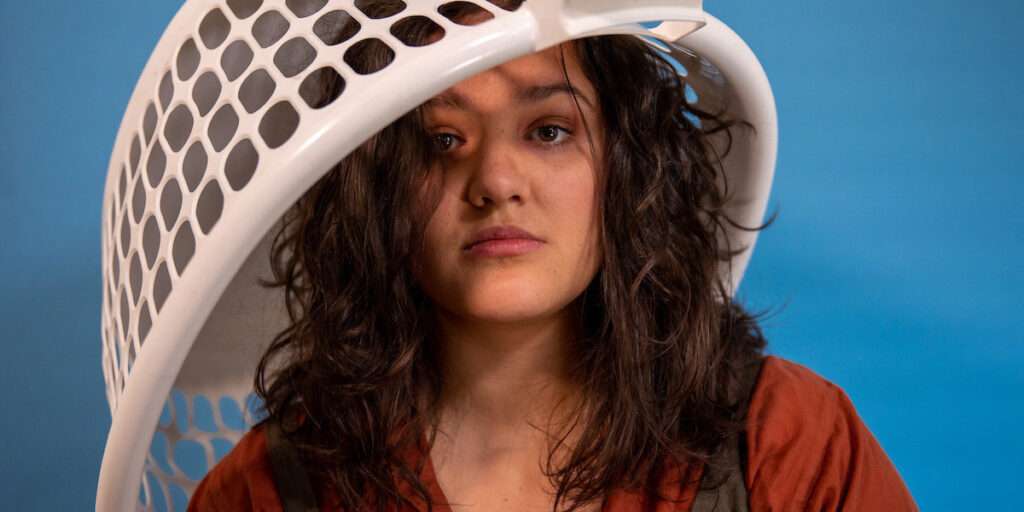 This show won me over with a bang, squirt, and a toot-toot-kazoo.

On entry I was greeted by a familiar scene: a twenty-something-year-old in trackies and a flannelette shirt with unbrushed hair lying in what can only be described as her own filth—food scraps, dirty clothes, dishes, toiletries—with Lana Del Ray playing over the top. Lana’s not my sad-white-woman-music of choice (I prefer Julien Baker), but it did the job. This is what depression often looks like.

As the show kicks off however, our heroine wakes up and explains that, in actual fact, she is doing great. Having come back from a whimsical ten-month trip to London where she—and she freely admits to this cliché—really “found herself”, she simply doesn’t care for banal “clear desk, clear mind” attitudes. She thrives in chaos. And why wouldn’t she? She’s a free spirit, a nonconformist, a real traveller.

I won’t summarise any more, but you can rest assured that if you see this show—which you should—you will get to listen to more than smug wanderlust nostalgia. Thankfully, an intervention expands this wily mythomaniac’s repertoire and we get to the good stuff: reflections on the absolute horror of being perceived by other human beings.

I was pleasantly surprised by just how clever things got. A Slight Exaggeration is well-written, creatively executed and deeply relatable. Poppy Mee—the star of this 48 minute monologue—has a natural flair for storytelling. She’s also really funny. More than once during the show I scribbled reminder notes to make a point of this including “Missy lololol” and “banana statue lololol”. Acting-wise there were a couple of moments where she could have toned it down, but that may just be my taste for subtlety.

So for creativity, cleverness and hilarity? Five stars easy. I literally muttered “incredible” to myself as Poppy Mee delivered her final punchline and left the stage.

For mental health awareness? There’s certainly a lot we can learn here around bettering wellbeing.

A Slight Exaggeration’s blurb defines insanity as not knowing fact from fiction. And indeed this show is ultimately about the fictions we create, big and small, to give ourselves a sense of control. How bad is lying for our mental health? Why do we do it? And is healing only really possible when we choose honesty?

Poppy Mee makes the simple point that maybe we can’t escape the judgement of others, but by holding ourselves accountable and speaking truthfully about our shame, fear, and imperfections, we might be able to find a truer form of happiness than the visions we curate on Instagram.

At least I think that’s what it’s about. She may just really love NFL.

Four and a half stars from mindshare.