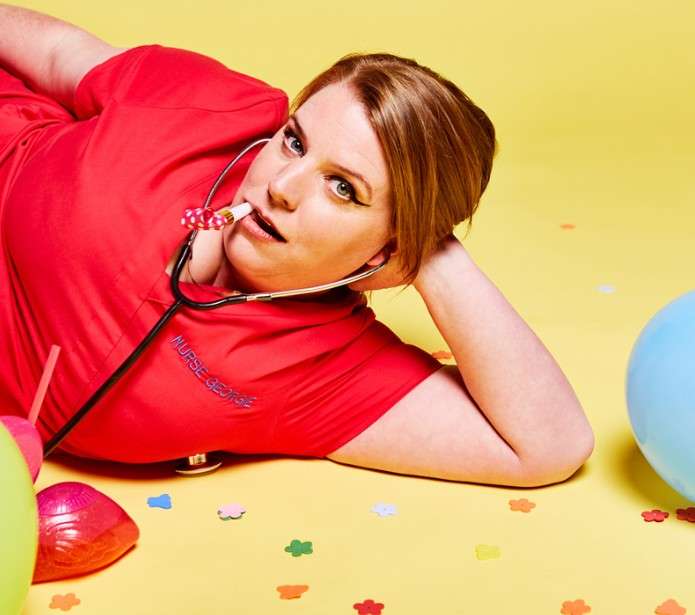 Georgie Carroll’s star is ascending. She’s hosted sell-out Fringe shows across Australia which have earned many ‘best of’ accolades around the circuit. She’s also become something of a regular on Network 10’s ‘Have You Been Paying Attention?’ After 18 years of juggling shows with Intensive and Emergency Care nursing, something had to give for this busy working mum and she’s now a full-time comedienne.

She warms up a packed-out Tuesday night crowd effortlessly with a quick shout-out to nurses. From the opening moments we get a clear idea of what’s in store, Carroll has a brash and bawdy sense of humour with lots of jokes about saggy tits, monstrous shits, and a whole host of unseemly intimate bits. She has a raucous, infectious laugh which bursts forth after most of the jokes she delivers, and the audience are soon howling along with her.

The jokes flow thick and fast and Carroll times them perfectly. She is a thoroughly competent entertainer with amazing stage presence and a larger than life personality which amply fills the large venue. Stand out moments from the routine include her Matrix style, slow-motion impression of attaching a urethra catheter to an unwilling patient and the long list of health and safety policies written specifically for her during her nursing career (no cartwheels, no warming random, non-bread-based foods in the toaster…).

Whilst these points of Carroll’s routine are genuinely hilarious due to her ability to laugh at herself, there are also moments which, in my opinion, show insensitivity. Apart from the almost constant references to the wonders of alcohol, Carroll expresses her ‘love’ of opiates, especially prescription-only drug ‘Endone’ which she describes as ‘magical’. Coupled with other flippant comments from our host such as ‘he has a looper pedal on his guitar, it repeats everything he puts in over and over – that’s what we have demented patients for’ there is a sense of laughing at people not with them.

I am left with the impression that this is a funny, gritty comedy show which would benefit from fine-tuning the material to accommodate a mental health perspective. While the less sensitive material forms a small part of the show, it is evident, and, in my opinion, the show could be demoralising for those dependant on drugs or alcohol or those with sensitive mental health issues.

There are some more touching moments which go a little way towards balancing Carroll’s less appealing comments. Carroll talks with compassion about her elderly grandmother, whose true-grit and sheer can’t-knock-me-down happiness have been inspirational to her.

And given some small tweaks, I’m sure that just like Granny, Carroll and her brand of unique, no-nonsense humour will be around for many years to come.

4 out of 5 Stars for great comedic material, well-delivered – but caution suggested for those with a history of substance dependency or a more sensitive disposition.