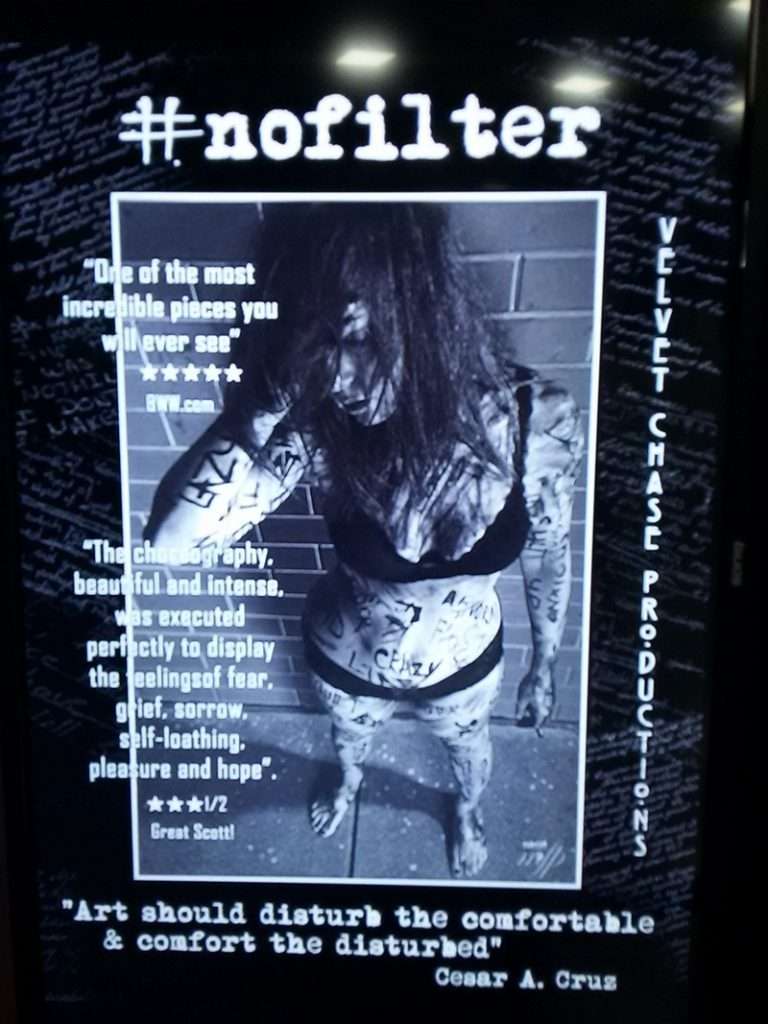 The last show I’m reviewing for mindshare is #nofilter, a blend of dramatic theatre and music at the Marion Cultural Centre last night.

Offering “a backstage voyeuristic view of The Black Dog Circus”, this was an intense experience from beginning to end, exploring themes of suicide, drugs, gender, rape, body dysmorphia and violence, with the audience seated at tables equipped with popcorn, glitter, tissues and patient clinical assessments of each of the casts’ characters.

In the first scene, we see a young girl who, after saying goodbye to her friend for the day, battles with demons, literally, as she tries to reconcile her fears and worries aided by an angel of sorts who is soon overpowered, culminating in the girl slitting her wrists in the bath.

The next scene opens with a clip of two schoolgirls sitting on a bed chatting, enter mum who is furious at their intimacy, throwing one out while she screams at the other (her daughter), packing her bags, so she can leave. Next, we see the daughter sleeping rough, shooting up, prostituting herself, the final part an overdose played out to an excellent cover of Madonna’s Like a Virgin, accompanied by a talented violinist.

One of the most poignant scenes centred around a girl wheeled onto the stage in a chair by one of the demons, who then proceeds to wind her up like a doll to perform, until she remembers her body and reveals a scar across her belly like a rictus. She spies three balloons at the top of a pole and scales it lithely to pop each one, watching as they explode into glitter.

In fact, balloons bookend the show – black ones escape from a box like desperate thoughts through to yellows rising indicative of hope, not before a single one of the latter kind is examined by each cast member as if confused by its bright presence. 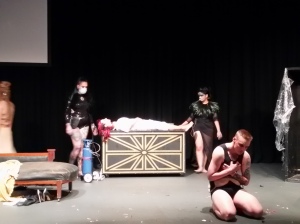 And so, the show progresses deeper and deeper, each scene standing alone, but connected with the dark at play in our lives, how you keep it in check or not, the human condition stripped and raw. This was my top pick last year, but it was cancelled due to one of the cast members taking their own life, one of many images of young people flashed on the screen as the remainder sing a beautifully moving rendition of Coldplay’s Fix You to sobs in the crowd.

The purpose of the show, with part proceeds going to suicide awareness, is to normalise the conversation about mental health, to reassure people it’s okay to not be okay and that no perception of shame is too great to seek help. Powerful doesn’t cut it.