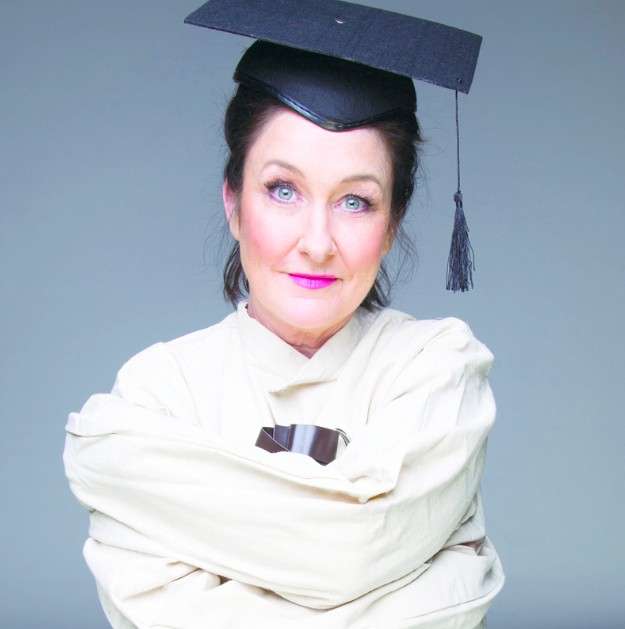 Fiona O’Loughlin is a comedian who doesn’t really care if she offends people. And she strikes me as someone who is not easily offended either.

Her show Gap Year toured around the country and she ended it at Thebarton Theatre this Adelaide Fringe. A native South Australian it was an apt way to end the tour. Her warm up was the Beautiful Bogan whose humour is not just about being a bogan but being a poor one. He met Fiona at a gig where he was also the warm up act. After the gig she hitched a ride back to Adelaide with him and they bonded over poverty. They agreed that poverty can be upsetting but it’s not the end of the world.

And that is the heart of this show. Fiona has had a very public battle with her alcoholism and it actually indirectly led to a four week coma where she was given a 7% chance to live. She had hit rock bottom and took a year out to come back.

She was 52 and had to move back home with her parents in Minlaton. Of course for a very dead pan, self deprecating  comedian there is loads of material there however I wanted to look at how she talked about mental health.

Firstly according to Fiona ‘when you drink vodka in the morning you have 1 of 3 endings – death, prison or an institution’. While Fiona dodged death and she hinted at a short stint at prison for her it was institution.

On a drinking binge Fiona walked in to the Royal Adelaide Hospital and asked to be admitted as she did not trust herself. After decades of alcoholism she knew that the best way she could handle drying out was within an institution, she was admitted to Glenside for 3 weeks before transferring to a treatment facility in Canberra.

But there were no jokes there other than a crack at the Adelaide Clinic. It was clear that while Fiona can make jokes about many parts of her life, her addiction to alcohol is treading lightly. In fact her promo image of being in a straight-jacket is more of a statement about outdated views of mental illness.

As a woman with a platform she could say more here to educate people about what addiction is like however this show was more about what it can do to you when you hit rock bottom.

For a full hour show The Gap Year covered starting all over again and family was at the heart of it. There more jokes about her family than anything else.

Fiona O’Loughlin is a guaranteed laugh, if you get her kind of humour. She’s not about to pussy foot around the hard stuff in life but this show proved there are some issues she will tread lightly.

While there was not a great deal said about how she got in to a coma there was a lot about coming out of it.