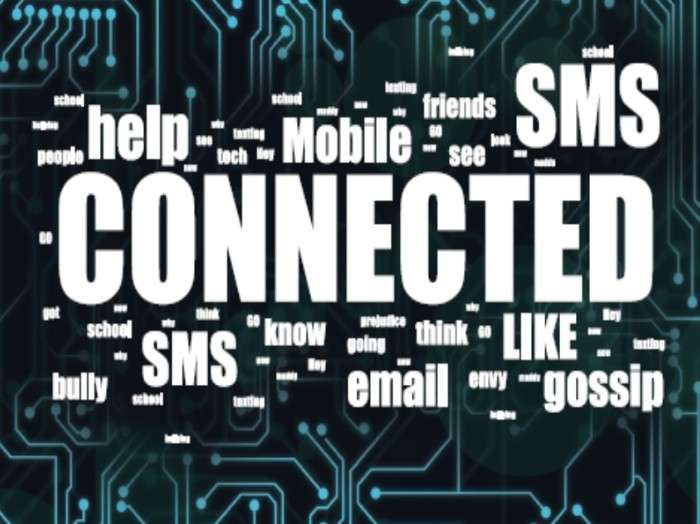 The show begins with a powerful whole cast performance of the title song, ‘Connected’. It’s a great introduction to the show’s themes as, dressed as high school students, the stars lament the perils of social media whilst explaining that you must stay ‘connected’ in order to be popular. One by one, the examples escalate until a final verse of the song outlines the attempted suicide of a young girl via live streaming. In my opinion, these lyrics are far too disturbing and explicit for a ‘family friendly’ show which carries a ‘G’ certificate.

Thankfully, as the show continues, it settles into more suitable subject matter. I am impressed by the quality of the performance on an obviously low budget. The entire show is contained within one set without the need for any background changes which centres and intensifies the feeling of pressure building within a confined space.

This captures the notion behind Connected perfectly – things which start small increase in magnitude until they become of horrific, life-threatening importance. Through a series of intense discussions and musical interludes initial ‘harmless’ comments against the new girl in school escalate to trolling and victimising via social media which inevitably convert to bullying, isolation, guilt and despair in real life. The issues discussed in Connected are contemporary and pertinent and when Jai Pearce’s character Mike validates the events as, ‘just the normal stuff that goes on in school’, the audience shudder at the confronting honesty of his words.

Whilst the production is a decent, if well-worn story on the pitfalls of social media, what sets Connected apart is the strength of the performances. The cast genuinely give their all during their time on stage. The solo routines thread the tapestry of the tale together and are well-executed and beautifully rehearsed. Billie Russell and Will Richards have particularly epic vocal pieces which anchor and accentuate the show. The songs are well-written, lyrically intelligent works which are worthy of a much larger platform (a personal favourite was ‘184 Friends’). They are cleverly woven and repeated through segments of the show and this layering effect amplifies the moral message.

Unfortunately, towards the end, there are times where I question the ‘G’ rating of the performance again as themes of sexual assault and extreme desperation emerge. On the whole, these issues are treated with sensitivity, but I believe a ‘PG’ rating for this show would have been advisable.

Ultimately, the pros of this performance far outweigh the cons. Pertinent, professional material is performed by talented actors and singers and I leave the theatre convinced that the artists have been following their own advice. ‘You gotta stay connected’, I hum as I leave the auditorium and I know each cast member did exactly that – from creator to choreographer to actor to audience, the connections were seamless, and as a result an important message was eloquently delivered.

3 and a half stars