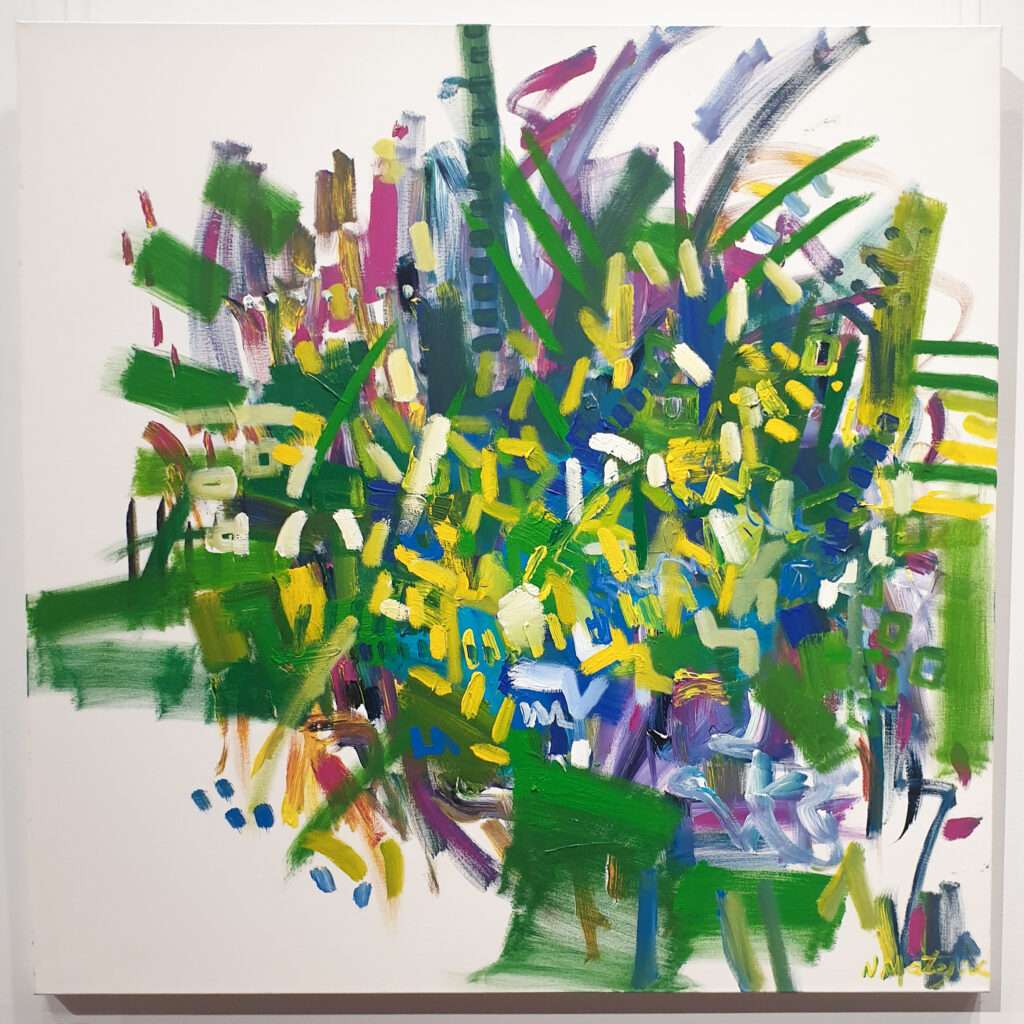 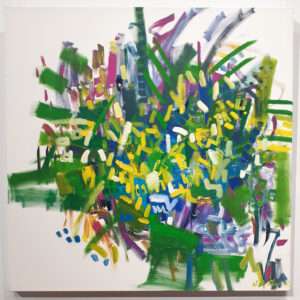 A canvas by Nigel Matejcic named “Health and well-being”. An explosion of thick verdant greens lays the background of the abstract piece, upon which vibrating chaotic lines and dashes in yellows, blues, pinks and purples undulate chaotically outwards.

Neami National is a community mental health service supporting people living with mental health issues to pursue a life based on their own strengths, values and goals. They are showing their fifth art exhibition, “Adaptation” at UniSA for just a few more days! mindshare was invited to opening night, and captured some beautiful artworks to share. 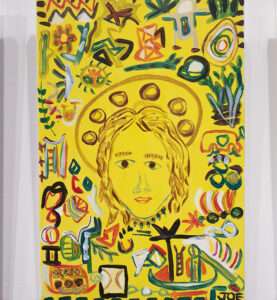 a canvas by Joe Amuso named “People that I love to meet #2”, with a yellow background, upon which a face with brown wavey hair and halo is sketched in brown and green outlines. Surrounding the face are various natural and supernatural symbols in greens, browns, reds, and whites. 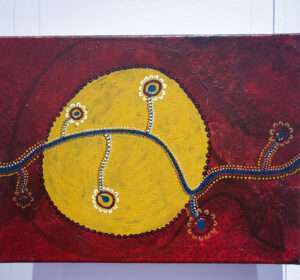 a canvas by Cecilia Kluge, named “Follow the Water”. It has a textured red and brown background, with a yellow sun edged in black and red dots in the middle. Through the center of the sun runs a blue line outlined in red dots, which at points sprouts branches with little white flowers.

“Adaptation – the act or process of changing to better suit a situation.” 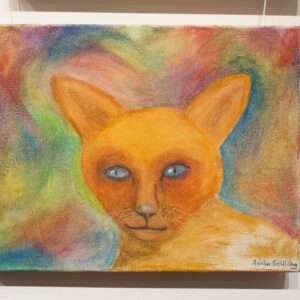 “With My Colourful background will I be Included?” by Ashton Schilling features an orange cat with huge ears and blue eyes against a background of chalk pastel hyper-rainbow swirls. 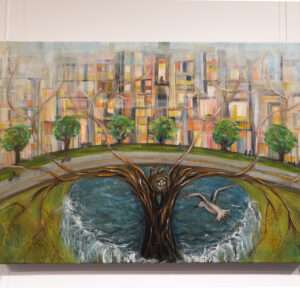 “Tomorrow’s Cities” by Audrey VanDen Heuvel, a pastel drawing on canvas of a large tree in the center of a pond bordered by a bike track and more trees. A seagull returns to its eggs nested in the tree as cyclists and dog walkers go past and a passive observer peers from the balcony of the multicoloured highrises that fill the sky.

As individuals and communities we’ve all had to adapt to the process of living with COVID-19. Neami Artists (local emerging artists who attend the Neami art programs) have drawn inspiration from their life experience of the constant process of adaptation as well as recent changes such as online studio sessions and reinventing how they create at home. 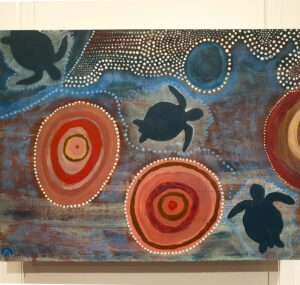 “Swimming around the Coral Reef” by Cecilia Kluge also features 3 turtles, silhouetted in black against a sandy brown and blue background. Two larger concentric circle patterns in red are in the middle, with another half appearing from the side, the edged dotted in white. White dots also cascade over the top of the canvas, and the turtles are connected to each other with pathways of blue dots. 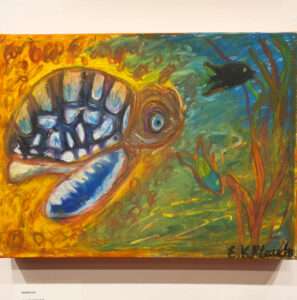 Soft oil pastels on canvas, “Turtle in Ocean Shores” by Edwina Klaucke shows a beautiful seaturtle making its way over the yellow sandy beach to the green and blue ocean, in which fish and seaweed frolic.

This project has received funding by the Australian Government, and aims to build resilience and strengthen community through social inclusion and interaction enhancing and increasing well-being.  Neami and The Bob Hawke Prime Ministerial Center value the importance art plays in recovery and through this exhibition they aim to foster greater creative expression, self-confidence, and professional achievements. 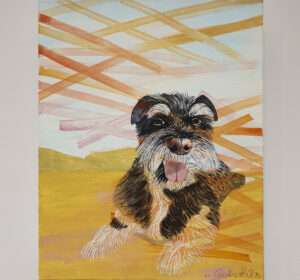 “Sunset Schnauzer”, a portrait by Catherine Pallin of a dappled gray and white terrier sitting on a mustard yellow blanket. Above it, modernist orange streaks create the effect of sunlight through a patio. 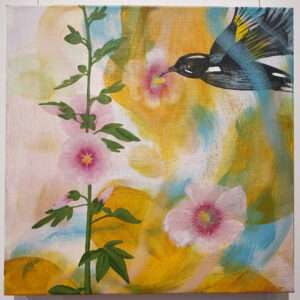 a square canvas by Catherin Pallin named “Hollyhock Dream”. A pink hollyhock rises against a background wash of warm browns and pinks, with blue waves running through it. From the right hand side a hummingbird hovers, feeding from the hollyhocks.

From modern abstracts in acrylic to digital photography this exhibition brings together a broad range of arts practice and an eclectic range of creativity.  There are over 50 artists involved with a wide range of life experiences. Some are regulars at the weekly programs run by artists and facilitators, and some pop in and out as they can, or depending on what creative workshop interests them. 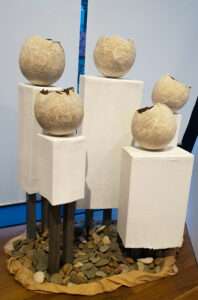 “Stepping Stones”, a collaborative sculpture by Emma, Kim, and Sarah is a mixed media sculpture honouring the women and staff of Catharine House. Five white plinths with wooden legs ride from a bed of river stones in a paper sack. On top of each plinth is a paper-mache sphere with the top cracked open, resembling broken eggs, or shattered pearls. 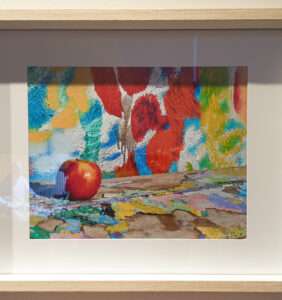 Vibrant photography by Jenny Zitzke, “Colour Up 1/25” shows a bright red apple resting on a wooden bench, the colourful paint chipped to show the pine underneath. Behind is a detail of a mural, a wild cacophony of colours swirling

The facilitators I spoke to told me that pretty much all the participants enjoyed the creative process and learning new techniques to express themselves, although some definitely favoured certain mediums and style over others.  A greater challenge is found in getting passionate artists “out there” into the greater arts industry, which makes exhibitions like this an valuable opportunity to be supported by wider artistic audiences that can connect artists with other galleries and opportunities. 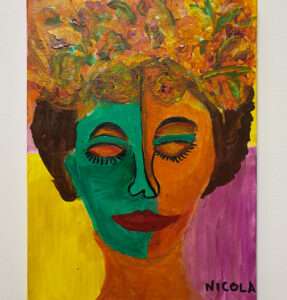 A vaguely cubist face in orange and green with red lips rests with eyes closed against a pink and yellow background. The “Happy Girl” by Nick Nicola has brown, orange and green wavy hair that blooms upwards over the canvas. 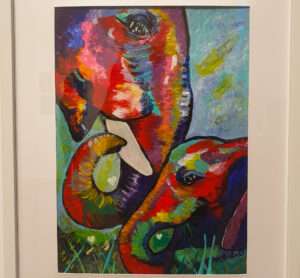 a framed acrylic painting on paper by Kylie Douglas named “Mother Love Elephants” featuring a close up of two hypercolour elephants against a blue and green background. The larger elephant looks down affectionately at the smaller elephant as they press foreheads.

The exhibition is up for just a few more days, closing on the 29th of July.
Head on down to the Kerry Packer Civic gallery to check it out!